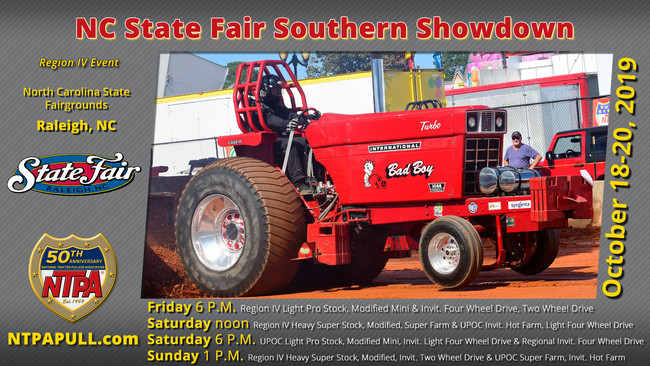 On Friday through Sunday, October 18-20, the North Carolina State Fairgrounds in Raleigh, North Carolina will host the NC State Fair Southern Showdown Truck and Tractor Pull as the final event of the 50th season of National Tractor Pullers Association Championship Pulling. The Regional National event will be conducted in four sessions.

In NTPA Championship Pulling, vehicles drag a 20-ton weight transfer sled along a straight, dirt track as the sled's resistance increases. Within a class of similar vehicles, the puller who achieves the greatest distance is victorious. At events across the United States, elite competitors campaign their specialized machines---which resemble farm tractors, trucks, and dragsters---for chances at purse money and precious points toward end-of-season championships.

In 2019, the Association is proud to complete its first half century as the world's original and number-one sanctioning organization for premier-level truck and tractor pulling contests. Fierce, fair pulling competition and a family-friendly, patriotic atmosphere are hallmarks of NTPA Championship Pulling. If you haven't experienced the rumbles, roars, and rivalries of the heaviest sport on wheels, why not give it a try in Raleigh?

Participants in the regional classes will run for titles in Region IV, which encompasses North Carolina, South Carolina, Virginia, and West Virginia. All will further compete for berths in the 34th edition of NTPA's all-star invitational Enderle Pull-Off on Saturday, September 19, 2020 in Urbana, Ohio.

Expected in Raleigh to defend their 2018 national titles are Ronnie Strickland of Selma, North Carolina ("Another Outlaw"), McDonald, Beasley, and Deane.

Fans in Raleigh will see all the action on the NTPA's Official LED Scoreboard, which features on-screen driver/vehicle identification and distances and instant replays.

For more information about the Southern Showdown, visit the event's website: www.NCStateFair.org. The Association's Schedule page at www.NTPAPULL.com has links to event details, maps, and local weather reports for the Southern Showdown and over 80 other events that constitute its historic 50th season.