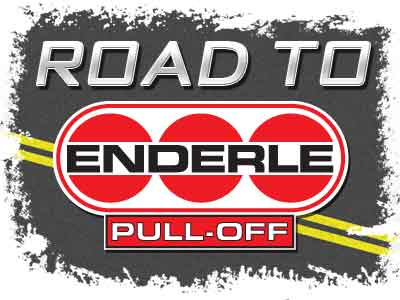 Worthington, Ohio---The Regional National side of the ledger ended soggily with rainouts in Roanoke (with points), Lynn (no points), and Tipton (no points), Indiana. At the same time, the Sandwich Fair got its precipitation on Wednesday, Thursday afternoon, and Friday---in other words, around but not atop the DeKalb County Nationals' pulling schedule. As a result, berths 41 through 65 in the 32nd Enderle Memorial Pull-Off were secured on the track, just like we like it. Unless and until we receive word that an invitee cannot participate, consider the list below to be your 2018 Pull-Off roster.

Don't miss out on discounted pre-event ticket sales to the Enderle, held at the Champaign County Fairgrounds in Urbana, still on sale for a few more days at ShopNTPA.com. And while you're online, stop by www.NTPAPULL.com for Enderle RN Traffic reports and complete, up-to-date final Grand National standings, final Enderle Pull-Off standings, and final Shell Rotella Cup standings.

GN SUPER STOCK DIESEL (Updated through Sandwich)
The one-through-five point spreads and number of GN tractors to answer DeKalb County's call were such that the latter could not impact the former if everybody hooked. Hence, one might be tempted to call Saturday's proceedings less than meaningful to the participants. But one would be wrong. Stan and Steve Blagrave coaxed their "Red Horse" through two reassuring runs after a month of subpar performances. Colin Ross picked up his sixth win of the year with "Triple Bypass" to keep a fading championship chance flickering and to start building toward 2019. Travis Schlabach's "Bone Twister" got two top-fours; Kent Payne's "Super Rooster," two top-threes. And Steve Burge got his first victory with "Lock-N-Load" on the very last hook to remind everyone of his presence heading into the Enderle, where he has won four times.

GN SUPER STOCK OPEN (Updated through Wellington)
Just like last year, the "Get a Load of That II" of John Strickland (John will stay home to deal with the hurricane, Brent Payne will drive both), clinched a title on the final hook of his class. This year, his closest competitor was his teammate, Brent Payne, who will be Enderle qualifier number two aboard "Get a Load of That." Coming in third was the class winner, Jordan Lustik's "Silver Bullet," and in fourth was Sid Broughton's "Desperado" with Rob Trowbridge at the controls. In fifth? The runner-up the past two seasons, Josh Blackbourn, whose "Internationanl Threat" won in its only GN appearance in Tomah. Update: Josh Blackbourn will be unable to attend, and so Kyle Karlen's "Bad Blood," which competed in the class at Wellington, will accept invitation number five.

GN SUPER FARM (Updated through Sandwich)
Stan Warda's "Hammerin' Hank" banked three wins in the season's first four hooks and made that stand up all the way to the finish line, in the process winning a Grand National title in his first season so licensed. Dave Whelan's late surge with "My Last Excuse" as usual had a BG ring to it, as he tallied 173 points in six late hooks to close to second. The Ferrises' "Absolutely Nuts" and "Assorted Nuts" were third and fifth around Tony Sietsema's "Wolverine Deere," which along with "Assorted" upset Chris Weidinger's "Black Power" and held off the Freezes' "Deere Traxx" in Sandwich to keep their Enderle invitations intact.

GN PRO STOCK (Updated through Sandwich)
A 14-point lead for Charles Pelletier was not by any means insurmountable with two hooks to go in DeKalb County. But it put the pressure on "CP Dream II"'s challengers to make their moves in the afternoon Session Two. By Session Three, they hadn't, and the Deere's 18-point lead expanded to 23 when Pelletier placed second to clinch his second title. Mark Lawyer's "Rapped Up with a Vengeance" became a two-time bridesmaid, while Jason Svonavec's three-win, third-place "Bootlegger" joined Lawyer as a perceived legit threat in 2019. Tim Cain's "Red Gambler" was fourth and Robby Lemke fifth after his "New Generation Plus" held off Chris Cain's "Aces Wild."

GN TWO WHEEL DRIVE (Updated through Canfield)
In a sense, we have a "new" champion in Two Wheel Drive. In another, it's the continuation of a historic streak, as Petro Motorsports captured its 10th consecutive division title when Randy Petro's "Kathy's Komplaint" beat out Sean Blagrave's "Wild Horse" head-to-head on Saturday night. It's Randy's fifth title of his own and the 12th for the family operation that includes son Jessie's "Buckeye Hauler" (2012-2017 champion) and the now-regional "2 Timin'" (2009). Canfield winner Bryan McDonald and "Suffering Sanity" finished fourth, just a point behind Jessie. And in fifth for the season was Craig Corzine's "Burn Notice," which won the show in Urbana last year with wife Ashley at the controls. Update: Ashley will get another turn in the seat in 2018.

GN FOUR WHEEL DRIVE (Updated through Canfield)
The weekend's tightest race came down to two early hooks and a long wait, as Ben Ellis' "Benjammin" accepted his 320' test hook in Wauseon, and Carmen Foster's "Foster Child" pulled in behind Ellis and Danny Johnson's "Talk to Me" at 308' three trucks later. At that moment, and for the next half hour or so, the two were tied in points; had that remained the case, Foster would have won the tiebreaker. But late in the evening arrived Jim Holman and Larry Peterson, who parked "4 Play" and "Profab Geared Up," respectively, between the two contenders to tip the race to Ellis. Locking down the fifth berth was Tyler Cobb's "Bandit," which fended off Ted Skelton's "Rock."

GN SUPER STOCK DIESEL FOUR WHEEL DRIVE (Updated through Sandwich)
The Sandwich Fair's Truck Night belonged to Carl Atley, whose "Lethal Weapon" took the win and the Grand National title. Finishing second and third in the points as well as the Thursday night class were Shane Kellogg's "Trump" and Justin Gearhart's "Cream of the Crop." Don Bowling's "Pulling for the Cure" came home fourth for the year and Brion Withrow's "Nut Job" fifth.

GN SUPER SEMI  (Updated through Bowling Green)
Congratulations all around to three of the long-haulers: Dean Holicky (Mother Trucker) for clinching his fourth GN title (2018, 2016, 2015, 2014), to Pat Eilen (Just' Passin' Thru in Class) for the championship ring, and to Ryan DeBroux (Playin' with Fire) for a two-win (Hutchinson S1, Ionia S2), six-top three season. But the laurels won't end there, and when you're looking toward Urbana, does anyone win (or love to win) at the Enderle more than Jack Kielmeyer (Jacked Up)? And how about Brian Elithorpe (Nikki's Nightmare), who'll return to Champaign County as the event's defending champ.

GN MODIFIED MINI (Updated through Wauseon)
With just nine point-earning Minis on the grounds, Adam Bauer's "Iron Toy" would stay safely ahead of Adam Koester's "Walk the Line" and its own stablemate "Cowboy Up" just by completing a legal pass. That race for second, however, was still up for grabs, and Koester's 2016 champion took its best shot, finishing second to class winner Chase Richardson to claim it. Behind Joe Eder's "Polar Air" and ahead of Ken Veney's "Funny Lil' Farmall," Koester also locked up the fifth berth with "Beast of Burden." So there'll be just three different drivers (and two different first names!) in the class when they flip on the lights in Champaign County.

GN LIGHT UNLIMITED (Updated through Bowling Green)
On Tuesday night, Steve Bollinger won to put his "Money Pit Screwed Up" four points ahead of Brandon Simon's "Simon Sez." Given that there were five GN-licensed tractors on the grounds and that Bollinger held all tiebreakers, the race would be over as soon as "Money Pit" tightened the chain on Wednesday. But no one told Simon not to bother, and he promptly won on Wednesday while "Money Pit" floundered to pull into a points tie and show momentum heading to the Enderle. Also moving in the right direction was Ted Boyer's "Mr. Twist-N-Shout" (fifth) which concluded a frustrating regular season with two straight seconds. Finishing third was Keith Wayson's "Super Bee" and fourth was the Simons' "Simon Sez Show No Mercy."
Update: Simon's will not be able to make the event, look for both Feiss Pulling Team tractors "S'no Farmer" & "Feissty Farmer" to fill the spots.

GN MODIFIED  (Updated through Sandwich)
Three weeks passed between the Modifieds' previous appearance in Bowling Green and their last two showings in Sandwich. Some of the machines busied themselves in Unlimited competition, including the chief rivals of Doug Lively's "Bank Robber," namely Bret Berg's "Money Maker" and Ricky Rose's "Giddy Up." But when Tractor Day in DeKalb County arrived, they both outpaced Lively in both sessions to narrow---but not quite erase---Lively's winning margin. Corey Kielmeyer's "Double Trouble" will make the journey to the Enderle Pull-Off in his first GN season (you'll recall, those Kielmeyers know the route well), while Bob Jostocks's "Wild Child" closed out teammate Bill Douglas Jr.'s "Spook Gone Wild" to claim spot number five.

GN UNLIMITED (Updated through Canfield)
Chuck Knapp went off the Canfield track a victor in two senses Saturday night, having won the class and clinched "Screamin D"'s long-anticipated fourth straight Unlimited title by 28 points over Adam Bauer's "Cross Threaded." Ricky Rose's "Giddy Up" kept its third-place position in the standings by notching the same place in the class, and David Richardson, who just had to hook to hold off Joe Eder's "Polar Air" for fifth, actually moved into fourth with "For Sale" over the absent "Money Maker" of Bret Berg.