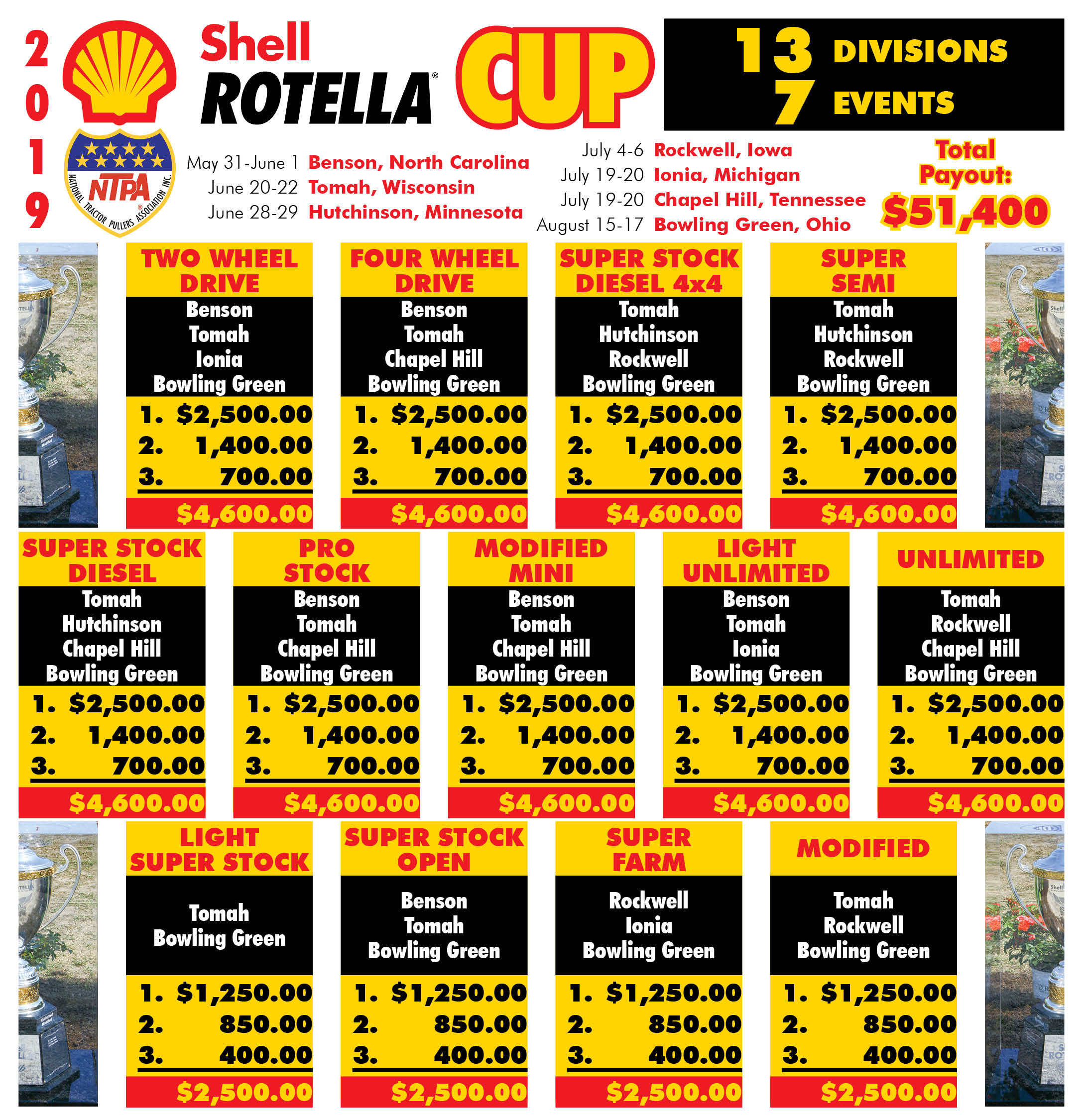 Worthington, Ohio---It’s a reason to turn the wick a little higher to shine a little brighter on the biggest stages. And it’s back in force for 2019.

For the second straight season, the Shell Rotella Cup bonus program will reward competitors across all 13 of the NTPA’s Grand National divisions with the prize total exceeding $50,000.

This year, the Cup will visit seven venues along the Association’s tour: the GALOT Motorsports Park Mule City 300, the Budweiser Dairyland Super Nationals, the Power Pull Nationals, the North Iowa Nationals, the Lions Super Pull of the South, the Ionia Free Fair Pullsation, and the National Tractor Pulling Championships. All 39 top-three finishers will be called to the BG winners’ circle at the conclusion of their final Cup sessions.

“It’s extremely gratifying to help connect Shell Rotella with our competitors and spectators,” said Gregg Randall, NTPA General Manager. “The Cup program has put the Rotella brand in front of massive crowds for over 10 years now, and this season it will visit tracks in seven states.”

In 2018, the first season of comprehensive Shell Rotella Cup participation, nine first-place finishers went on to win their divisions’ Grand National titles. But for the four others, hoisting the Cup was the peak of their mountain.

The Bobcat Jr. Modified Mini Team, for example, made clear their intentions to run hard for the Cup and outdistanced their fellow Dutch countrymen from the Lambada Team by five points and champion Adam Bauer by nine. Bauer’s own “Cross Threaded,” in turn, won four times across seven appearances in the Unlimited class to edge Chuck Knapp by one marker. The Holmans’ “4 Play” Four Wheel Drive showed southern Saturday-session supremacy in Carolina and Tennessee to put four on Peyton Davis’ “Young Gun.” And Brandon Simon’s heartbreak at missing out on a fourth Light Unlimited title on a tiebreaker was eased a little when “Simon Sez” held off the champion Money Pit Team by three.

“Both Shell and the NTPA have gotten great value from this collaboration,” Randall continued. “Relating the Rotella name with pulling and therefore to lots of people who use heavy-duty lubricants on their farms and in their trucks has been good business for Shell. And the Cup—it’s a game within a game that NTPA pullers in every division can play and all our fans can follow.”

Throughout this season, the Association’s official website, www.NTPAPULL.com, and its social media outlets will link to Shell Rotella “Cup-Dates” that feature news and photos from each event soon after it wraps. The Shell Rotella Cup Standings page will keep up-to-the-minute point tallies as will the “NTPA Championship Pulling” series on RFD-TV.

And of course, readers are encouraged to watch each in-season issue of The Puller for updated Cup standings in alignment with the events as they are reported.

Watch the 15th season of "NTPA Championship Pulling" presented by Case IH: Tuesdays at 6:30 p.m. Eastern/5:30 p.m. Central. Encore performances appear on Mondays at 12:30 a.m. and 6 a.m. Eastern. RFD-TV is available on satellite through DirecTV (345), Dish Network (231), and AT&T (568) along with Spectrum/Time Warner, Brighthouse, Comcast, Charter, Suddenlink, Cox, and other cable providers. Check your current provider for details or visit the channel finder at www.rfdtv.com.