Columbus, Ohio---The Enderle Pull-Off will pull on through at least 2025. 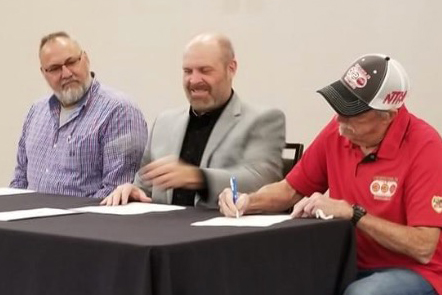 An agreement has been reached between the NTPA and Enderle Fuel Injection of Simi Valley, California for Enderle's continued sponsorship of the annual all-star event, which brings national champions and top finishers to the Champaign County Fairgrounds in Urbana, Ohio at season's end. Mike Keena, President of Enderle Fuel Injection, and Gregg Randall, the Association's Executive Director, signed the multi-year contract in view of the assembled membership at the NTPA's annual Appreciation Breakfast on Saturday, December 4, part of the 50th Convention and Awards Banquet weekend.

Dates for the next four editions of the Kent and Joan Enderle Memorial Pull-Off, Saturdays all, are September 17, 2022; September 16, 2023; September 14, 2024; and September 13, 2025. The event will continue to invite top-five finishers in Grand National divisions and qualifiers from Regional National divisions to share in a purse in excess of $80,000 funded mostly through Enderle Fuel Injection's sponsorship.

Over the course of its 34-year history, the pull known simply as "The Enderle" has paid over $2 million to NTPA competitors who run the hardest all season long.

"With this signing, Mike has put in writing the sentiment he has voiced so often since [his father] Kent's passing in 2016," noted Randall. "That being, that the Enderle Pull-Off must continue to represent Kent's gift to the most devoted pullers and their most enthusiastic fans. 'It's too important for it to just go away,' Mike has so often said. And now we know it's here for the next several years, and at a venue in a community that has really welcomed the Enderles as part of our west-central Ohio family.

"We at the NTPA embrace the challenge of continuing Kent and Joan's brilliant legacy alongside Mike and Yovana for many Septembers to come."

The Pull-Off was conceived in 1987 as a year-end bonus program to accompany the Ohio State Fair Championship Pull. It moved to Fort Recovery, Ohio in 1990 and has been conducted as a standalone event in Urbana since 2006. Qualifying for the 2022 event began at 2021 events in Allegan and Hillsdale, Michigan; West Salem, Ohio; and Raleigh, North Carolina; and every 2022 national open-entry event through September 10 will influence the eventual roster of competitors.

For more information about the Enderle Pull-Off, visit the event's webpage, AllStarPull.com. To learn about NTPA Championship Pulling and follow title and Enderle qualifying races, check out NTPAPULL.com.