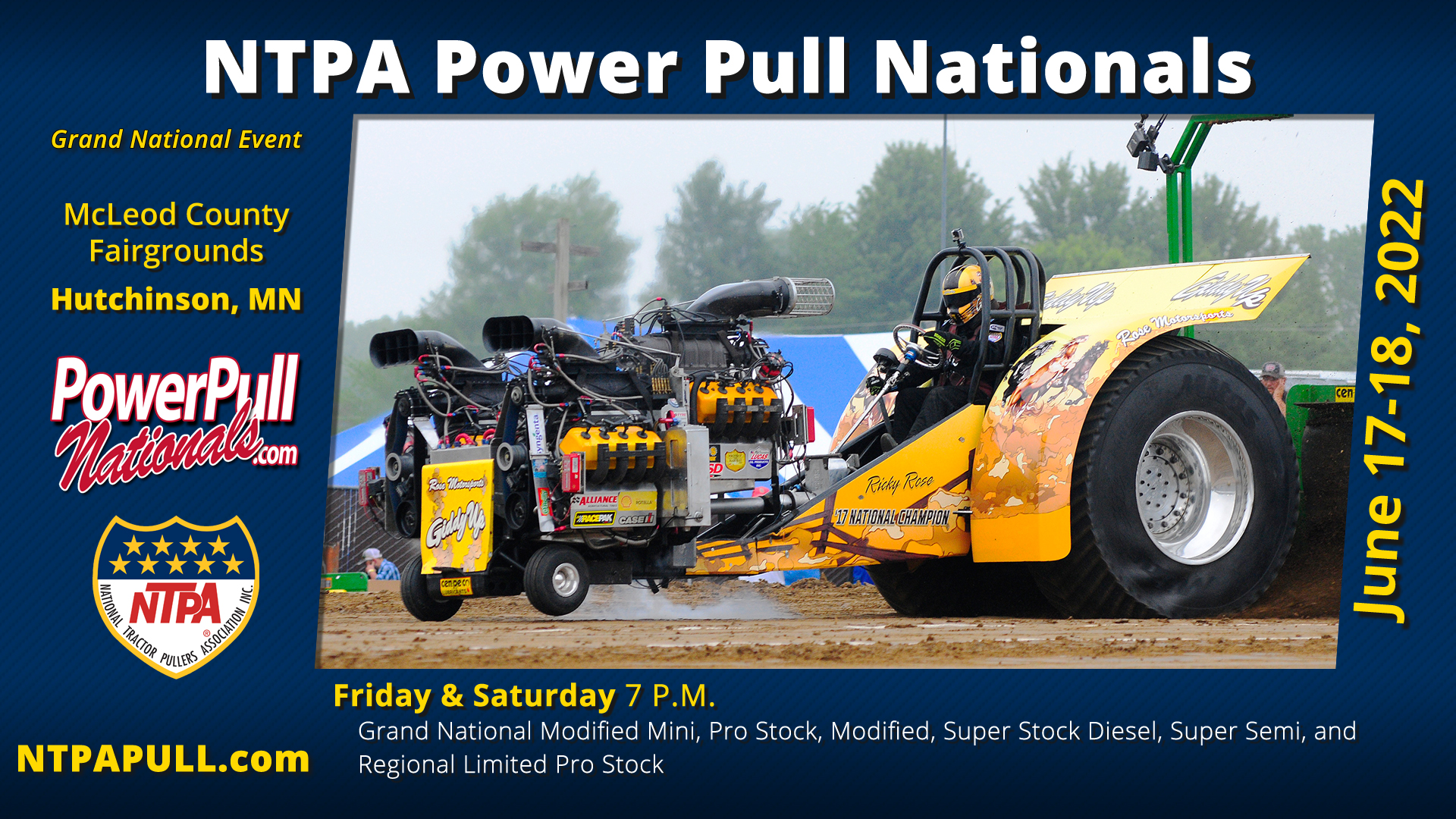 Columbus, Ohio---Let's all pull together, America!

The 2022 National Tractor Pullers Association Championship Pulling season continues with the Power Pull Nationals on Friday and Saturday, June 17 and 18 at the McLeod County Fairgrounds in Hutchinson, Minnesota. Both sessions of this Grand National event will feature Super Stock Diesel and Pro Stock Tractors, Super Semi Trucks, and Mini and multi-engine Modifieds, plus a Pro National class of Limited Pro Stock Tractors, beginning at 7 p.m.

Buy tickets to this event now at ShopNTPA.com/tickets.

Truck and tractor pulling is a contest in which a highly specialized competition vehicle drags a weighted sled whose resistance increases as it travels. Among a group of competitors driving similar machines, the winner is the one whose tractor, truck, or modified moves the sled the greatest distance along a straight course. Founded in 1969 to establish nationwide competition and safety rules for pulling, the NTPA and its member organizations present around 150 events each year and award champions of state, Regional National, and Grand National circuits in dozens of vehicle divisions.

Pullers are owners and operators, farmers and foremen, engineers and entrepreneurs, mechanics and machinists who love to turn wrenches, tires, and dirt---just like their fans. We welcome kids of all ages to tour the open pits at NTPA venues, meet our talented drivers, and get up close to these exotic vehicles that look fast standing still. Our shows respect faith, family, and flag, and everyone is welcome. Come celebrate American ingenuity with us in Hutchinson!

In addition to its inclusion in the 2022 Grand National Pulling Circuit presented by Case IH Agriculture, the Power Pull Nationals is among the events in the $36,000 Triple Crown Challenge Series for all five of its GN divisions. Competitors in each of these divisions will vie for their shares of $3,000 to be distributed to top-five Triple Crown GN point earners at season's end. Moreover, all will be battling for berths in the 35th Enderle Pull-Off all-star invitational on Saturday, September 17 in Urbana, Ohio.

The Limited Pro Stocks will compete for points toward the Region III-West championship and Enderle Pull-Off berth as well as a raised Pro National purse.

Fans in Hutchinson will see all the action on the massive NTPA Mobile Videoboard. The event will also be part of Season 18 of "NTPA Championship Pulling" on RFD-TV, which will debut in August.

For more information about the Power Pull Nationals, visit the event's website, www.PowerPullNationals.com, or its Facebook page. To learn more about NTPA Championship Pulling, visit www.NTPAPULL.com.