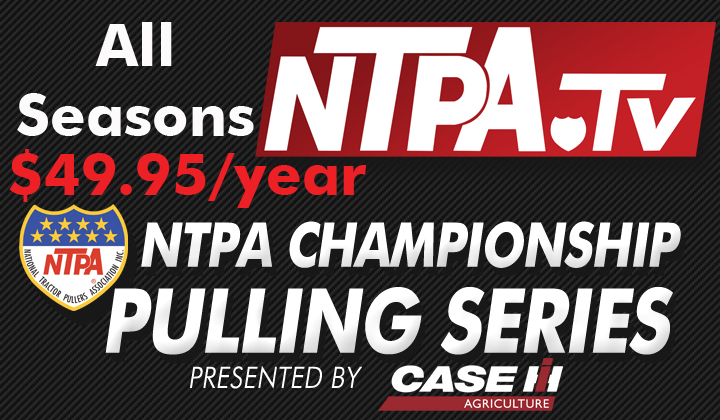 Worthington, Ohio---It's been quite a spring. And as the American society and economy awaken from our self-imposed slumber, we dearly hope that the reopening finds you and your loved ones healthy and well.

We figure you're ready to see something cheerful come across your smart TV, PC, or mobile device. How about the blistering speed, shattering noise, and astonishing power of your favorite motorsport?

Right now, and for a limited time, you can watch all 15 seasons of "NTPA Championship Pulling" for one full year at $49.95. That comes to nearly 400 episodes of the longest-running television series in the sport's history as filmed for broadcast by AP Productions.

Catch up on memorable moments you haven't seen in years as the NTPA's legends of the millennium stake their claims to greatness on the toughest tracks on the NTPA circuit: Hutchinson. Tomah. Rockwell. Chapel Hill. Bowling Green. The Enderle Pull-Off. Cloverdale. Episodes past and present include the original calls by hosts Army Armstrong, Gregg Randall, Ashley Corzine, and Doc Riley.

The package is commercial-free and accessible on demand---anytime, day or night---at NTPA.tv, truck and tractor pulling's cutting-edge live-streaming launchpad. Casually peruse the pictorial selection interface to rediscover a monster pass or scintillating finish. Or go straight to a specific season and episode to relive your pulling heroes' boldest moves along their winding paths to Grand National glory.

In these challenging times, we recognize that your entertainment dollar needs to bring you greater value than it ever has before. We think you'll find that our televised, guided tour of the modern era of premier-level pulling will entertain your whole family in front of one screen.

So while our chance to bring pulling to you in person may be limited in the short term, let us help you gather the ones who mean the world to you---and leave the world behind, at least for a little while.

Browse to NTPA.tv for subscription and device details, and then proceed to the NTPA TV Series Videos (All Years) Page. And be safe.